Students can Download Chapter 3 Electrochemistry Notes, Plus Two Chemistry Notes helps you to revise the complete Kerala State Syllabus and score more marks in your examinations.

Electrochemistry-
branch of chemistry which deals with the inter-relationship between electrical energy and chemical changes.

Electrolysis – The chemical reaction occuring due to the passage of electric current (i.e., electrical energy is converted into chemical energy).

If an external opposite potential is applied in the Daniell ce|l, the following features are noted:
a) When Eext < 1.1 V,
(i) electrons flow from Zn rod to Cu rod and hence current flows from Cu rod to Zn rod.
(ii) Zn dissolves at anode and Cu deposits at cathode.

c) When Eext > 1.1 V
(i) Electrons flow from Cu to Zn and current flows from Zn to Cu.
(ii) Zn is deposited at the Zn electrode and Cu dissolves at Cu electrode.

Galvanic Cells :
In this device, the Gibbs energy of the spontaneous redox reaction is converted into electrical work.

The cell reaction in Daniell cell is a combination of the following two half reactions:

These reactions occur in two different vessels of the Daniell cell. The oxidation half reaction takes place at Zn electrode and reduction half reaction takes place at Cu electrode. The two vessels are called half cells or redox couple. Zn electrode is called oxidation half cell and Cu electrode is called reduction half cell. The two half-cells are connected externally by a metallic wire through a voltmeter and switch. The electrolyte of the two half-cells are connected internally through a salt bridge.

Salt Bridge :
It is a U-shaped glass tube filled with agar-agar filled with inert electrolytes like KCl, KNO3, NH4NO3.

How to calculate emf of a cell when concentration varies from standard conditions.

Electrochemical Series/Activity series :
The arrangement of various elements in the increasing or decreasing order of their standard electrode potentials.

4. To predict whether H2 gas will be evolved by reaction of metal with acids – All the metals which have lower reduction potentials compared to that of H2 electrode can liberate H2 gas from acids.

5. To predict the products of electrolysis.

Nernst Equation for a Galvanic Cell :
In Daniell cell, the electrode potential for any concentration of Cu2+ and Zn2+ ions can be written as,

Converting to natural logarithm to the base 10 and substituting the values of R, F and T=298 K, it. reduces to

where Kc is the equilibrium constant.

Electrochemical Cell and Gibbs Energy of the Reaction (∆rG):

Conductance of Electrolytic Solutions: .Conductors:
A substance which allows the passage of electricity through it. Conductor are classified as,

Metallic or Electronic Conductors:
In these the conductance is due to the movement of electrons and it depends on:

ii. Electrolytic Conductors
Electrolytes – The substances which conduct electricity either in molten state or in solution, e.g. NaCl, NaOH, HCl, H2SO4 etc. The conductance is due to the movement of ions. This is also known as ionic conductance and it depends on:

Ohm’s law – It states that the current passing through a conductor (I) is directly proportional to the potential difference (V) applied.
i.e., I ∝ V or I = \(\frac{V}{R}\)
where R – resistance of the conductor- unit ohm. In SI base units it is equal to kg m²/s³ A²

The quantity \(\frac{\ell}{\mathrm{A}}\) is called cell constant and isdenoted A by G*. It depends on the distance (/) between the electrodes and their area of cross-section (A).

Variation of Conductivity and Molar Conductivity with Concentration :
Conductivity (K) always decreases with decrease in concentration both for weak and strong electrolytes. This is because the number of ions per unit volume that carry the current in a solution decreases on dilution.

Molar conductivity (Λm) increases with decrease in concentration. This is because the total volume, V of the solution containing one mole of electrolyte also increases.

The variation of molar conductance is different for strong and weak electrolytes,

1. Variation of Λm with Concentration for Strong Electrolytes:
The molar conductance increases slowly with decrease in concentration (or increase in dilution) as shown below: 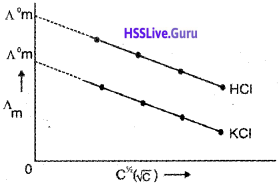 2. Variation of Λm with Concentration for Weak Electrolytes :
For weak electrolytes the change in Λm with dilution is due to increase in the degree of dissociation and consequently increase in the number of ions in total volume of solution that contains 1 mol of electrolyte. Here, Λm increases steeply on dilution, especially near lower concentrations.

Thus, the variation of Λm with √c is very large so that we cannot obtain molar conductance at infinite dilution Λ°m by the extrapolation of the graph.

3) To determine the dissociation constant of weak electrolytes

Quantitative Aspects of Electrolysis
Faraday’s Laws of Electrolysis First Law:
The amount of any substance liberated or deposited at an electrode is directly proportional to the quantity of electricity passing through the
electrolyte.
w α Q where ‘Q’ is the quantity of electric charge in coulombs.
w = ZQ .
w = Zlt
(∵ Q = It) where T is the current in amperes , ‘t’ is the time in seconds and ‘Z’ is a constant called electrochemical equivalent.

Second Law:
The amounts of different substances liberated by the same quantity of electricity passing through the electrolytic solution are proportional to their chemical equivalent weights.

The quantity of electricity required to liberate/deposit 1 gram equivalent of any substance is called Faraday constant ‘F’.
1 F = 96487 C/mol ≈ 96500 C/mol

Products of Electrolysis:
It depend on the nature of the material being electrolysed and the type of electrodes being used.

When concentrated aqueous solution of NaCl is electrolysed, Cl2 is liberated at anode, but at cathode H2 is liberated instead of Na deposition due to the high reduction potential of hydrogen.

The resultant solution is alkaline due to the formation of NaOH.

Commercial Cells (Batteries)
The electrochemical cells can be used to generate electricity. They are two types:
i) Primary Cells:
Cells in which the electrode reactions cannot be reversed by external energy. These cells cannot be recharged, e.g. Dry cell, Mercury cell.

ii) Secondary Cells :
Cells which can be recharged by passing current through them in the opposite direction so that they can be used again.
e.g. Lead storage battery, Nickel-Cadmium cell.

3) Fuel Cells :
These are Galvanic cells designed to convert the energy of combustion of fuels directly into electrical energy.

H2 – O2 fuel cell – In this, hydrogen and oxygen are bubbled through porous carbon electrodes into concentrated aqueous NaOH solution, which acts as the electrolyte.

Advantages of Fuel Cells –
pollution free, more efficient than conventional methods, Runs continuously as long as the reactants are supplied, electrodes are not affected.

Corrosion :
Any process of destruction and consequent loss of a solid metallic material by reaction with moisture and other gases present in the atmosphere. More reactive metals are corroded more easily. Corrosion is enhanced by the presence of impurities, air & moisture, electrolytes and defects in metals.
Examples: Rusting of iron, tarnishing of Ag.

Mechanism:
In corrosion a metal is oxidised by loss of electrons to O2 and form oxides. It is essentially an electro chemical phenomenon. At a particular spot of an object made of iron, oxidation take place and that spot behaves as anode.
2 Fe(s) → 2 Fe2+ + 4\(\overline { e } \)E° = -0.44 V

2) Sacrificial Protection:
Coating the surface of iron with a layer of more active metals like Zn, Mg, Al etc. The process of coating a thin film of Zn on iron is known as galvanisation.

3) Anti-rust Solutions:
Applying alkaline phosphate/ alkaline chromate on iron objects which provide a protectve insoluble film. Also, the alkaline nature of the solutions decreases the availability of H+ ions and thus decreases the rate of corrosion.