Properties of Matter Questions and Answers

The matter commonly seen in three states, solid, liquid and gas. Matter has volume and mass. Matter is anything which occupies space and has volume. The solid has a definite shape. But liquid occupy the shape of the container. Gas has no definite shape.

The particles of solids are very close to each other. The freedom of movement of particles is limited. The attractive force between particles is very high.

Some substances, when heated, change directly into gas without forming liquid. This phenomenon is sublimation.

Diffusion of substances in different states

The fragrance of incense stick fills the room when the stick is lit. The fragrance spreads because its particles are spread in air. If a drop of ink is added carefully into the water in a beaker, the ink spread in the water.

The spontaneous mixing of different particles having freedom of movement is Diffusion.

The substances made of particles of different nature are called mixtures.
Eg: Salt solution, sugar solution

Separating the Components of a Mixture.

Most of the substances found in nature are mixtures. We use different methods of separation of components in rice mixed with stones, tea mixed with tea dreg, mixture of methanol and ethanol.

Distillation is used for separation of components in salt solution. 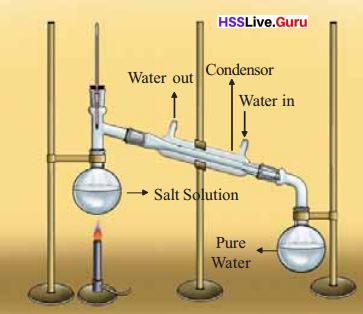 If the boiling points of components have very small differences, fractional distillation is to be used to separate them.

When vapours of the mixture pass through the fractionating column, repeated. liquefaction and vapourisation take place. Subsequently, the vapours of low boiling methanol enter the condenser from the fractionating column, condense to liquid and get collected in the round bottomed flask first. Similarly, ethanol with higher boiling point can be collected later in another round bottomed flask.

Separating funnel is an apparatus used for separating immiscible liquids from their mixture. 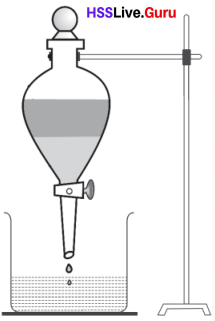 We can use separating funnel to separate the mixture of water and kerosene which are having difference in density.

This is a method for separating components from a mixture, based on the difference in the mass of particles. This method is used in clinical laboratories to separate blood cells from blood samples and also for separation of butter from curd.

In order to separate insoluble particles in a liquid mixture on the basis of their mass difference, centrifuge is used. The process is known as centrifugation.

Basic Science Class 8 Solutions Chapter 4 Kerala Syllabus Question 1.
A few mixtures are given below. Tabulate the methods to separate their components and give the reasons for selecting the method.

8th Class Biology Notes Pdf Kerala Syllabus  Question 2.
Given below are certain changes taking place to the particles during change of state. From this, find out and tabulate the changes in the particles when water boils to form steam and also when steam condenses to form water.

Kerala Syllabus 8th Standard Chemistry Notes Question 3.
Spirit kept open in a.watch glass disappears after some time. Which among the following phenomena are responsible for this?
a) sublimation
b) distillation
c) evaporation
d) diffusion
Answer:
a) sublimation

Basic Science For Class 8 Chapter 4 Kerala Syllabus Question 4.
Which are the methods that can be used to separate the components of a mixture made of common salt, ammonium chloride and sand? Write the methods in the order in which they are applied.
Answer:
sublimation → filtration → distillation

Kerala Syllabus 8th Standard Physics Notes  Question 5.
Many minerals are present in ordinary water.
a. Which is the method that can used to remove the mineals and obtain pure water?
h.In which type of mixtures is this method employed?
c. Water purified by this method is distilled water .Write two instances of its use.
Answer:
a. distillation
b. When one component of the mixture is volatile and the others do not vapourise under the same condition, they canbe separated by distillation
c. For vaccination, In storage batteries

Question 7.
Take a small wooden rectangular block and find its volume (volume = length x breadth x height).
Take a big measuring jar and fill three-fourth of it with water and mark the‘water level. Then dip the block in water in the jar. (To prevent floating, nails can be inserted in the block). Mark the difference in the water level.
a. Is there any relation between the difference in the water level and the volume of the block?
b. Which property of matter is revealed by this experiment?
Answer:
a.Yes. the volume of water rises is the volume of wooden block.
b. The substance that occupies a space.

Question 9.
Take water mixed with chalk powder in a bottle. Tie a string to the bottle and swirl it at high speed along a circular path. Observe after sometime.
Repeat the activity using other mixtures which are suspensions. To which method of separation of components of a mixture can this be connected? Are there instances where this principle is made use of. Prepare a note.
Answer:
Centrifugation is the method used. This is a method for separating components from a mixture, based on the difference in the mass of particles. This method is used in clinical laboratories to separate blood cells from blood samples and also for separation of butter from curd.

Question 10.
Take a long white chalk piece and put a mark with black ink slightly above the bottom. Keep the chalk piece dipped perpendicularly in water in a watch glass. After sometime observe the changes. Repeat the experiment using different chalk pieces marked with sketch pens of different colours. To which of the methods of separation you have studied is this related?
Answer:
Chromatography

Question 2.
What is the use of chromatography?
Answer:
Solutes dissolved in the same solvent can be separated using chromatography.

Question 3.
What is the importance of evaporation? Where is this technique used on a large scale?
Answer:
Evaporation is used to separate solids dissolved in liquids, mainly water. It is used on a large scale to obtain common salt from sea water. Sea water is left in the open in large containers on sunny days. After a few days salt remains as residue and water evaporates. Common salt is then further purified.

Question 5.
Which process is used to dry clothes in a washing machine?
Answer:
Centrifugation.

Question 8.
Melting: Converting solid into liquid Sublimation:
a. Observe the first pair and fill up. the blanks in the second pair suitable.
b. Write two examples of sublimation
Answer:
a. Sublimation. A solid directly changes into gas
b. Camphor, iodine, naphthalene.

Question 9.
From Gopu’s hand the bottle containing coconut oil fall into a bucket containing water. Is it possible to separate oil and water?
Answer:
Using a separating funnel, they can be separated. The denser water will be at the bottom and the lighter oil will be at the top. Water is removed through the tap.

Question 11.
Will water fill in tumbler when a glass tumbler is immersed perpendicularly into the water in a turf ? Give reason.
Answer:
No because there is air in the tum-bler. Air need space to occupy so water cannot enter into the tumbler.

Question 12.
A balloon filled with air and an empty balloon weigled in a digital balance found difference in weight. What are the properties of matter understood by this experiment?
Answer:
Matter needs space to occupy and has mass. 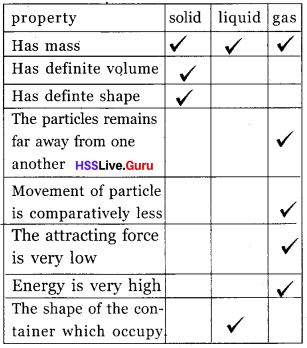 Question 14.
Which energy causes the change of state when ice is heated to water and water to water vapour? The three figures shows the arrangements of particles. Recoga- nise and write the state of matter. 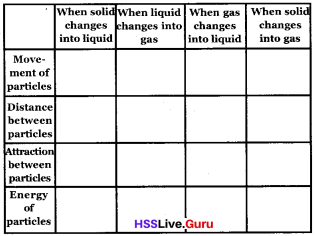 Question 17.
When naphthalene balls are kept somewhere after some days its size diminishes and disappears. Name the phenomenon caused for this process.
Answer:
Sublimation

Question 18.
Mention the reason behind the smell spreads everywhere in the room while in scent stick is lighted. Sublimation, Evaporation, Diffusion
Answer:
Diffusion

Question 22.
Salt, rava and mustard are mixed while Suresh has brought it from shop. Say methods to separate these.
Answer:
Salt dissolves in water. Then filter it. Rava and mustard are separating by picking, salt is collected by distillation.

Question 23.
What will be seen when a filter paper is marked by sketch pen and one end of the paper is dipped in water? what is this process called?
Answer:
different colours are separated. Chromatography