Plus One Chemistry Organic Chemistry: Some Basic Principles and Techniques One Mark Questions and Answers

Question 1.
Which of the following does not contain fused benzene ring?
a) Naphthalene
b) Anthracene
c) Diphenyl
d) Phenanthrene
Answer:
c) Diphenyl

Question 7.
Which of the following carbocation is most stable?

Thus, option (b) is correct.

Question 8.
The best and latest technique for isolation, purification and separation of organic compounds is:
a) Crystallisation
b) Distillation
c) Sublimation
d) Chromatography
Answer:
Chromatography. Thus, option (d) is correct.

Question 10.
Which of the carbocation is more stable?

Question 14.
Glycerine can be purified by __________ .
Answer:
Distillation under reduced pressure.

Plus One Chemistry Organic Chemistry: Some Basic Principles and Techniques Two Mark Questions and Answers

2. When an alkene is allow to react with ozone, an ozonide is obtained. This on hydrolysis gives aldehyde/ ketone. The whole process is called ozonolysis. Eg:

Question 3.
Addition of HBr to propene yields 2-bromopropane, what happens if benzoyl peroxide is added to the above reaction.
Answer:
When propene is allowed to react with HBr in the presence of peroxide, 2 bromo propane is obtained as the minor product and this is called peroxide effect.

Question 4.
Write the IUPAC name of

Question 5.
Write any two necessary condition for a compound to be aromatic. Convert Acetylene to benzene.
Answer:
Cyclic, Planar and should contain (4n+2) n electrons.

Question 7.
Which is expected to be more stable, O2 NCH2CH2O or
Answer:

has -l- effect and hence it tends to disperse the -ve charge on the O-atom. In contrast, CH3CH2 exerts + l – effect. It, therefore, tends to intensity the -ve change and hence destabilizes it.

Plus One Chemistry Organic Chemistry: Some Basic Principles and Techniques Three Mark Questions and Answers

Question 2.
Isomers are compounds with same formula and different properties.
a) Write all the possible structural isomers of C5H12.
b) Give the IUPAC name of above isomers.
Answer: 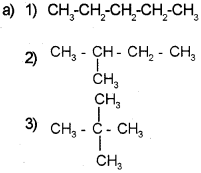 Question 3.
a) Give the IUPAC names of:

b) How is nitrogen detected by Lassaignes test?
c) Name a suitable technique for separation of the components from a mixture of benzene (b.p.353 K) and aniline (b.p.-457 K)
Answer:
a) (i) 2-Chloro 3-methyl hexane
(ii) 2-Methylbutanal

b) About 2 mL of the extract is boiled with about 1 mL of freshly prepared ferrous sulphate solution. One or two drops of con.H2SO4 are added to the solution. Presence of nitrogen is indicated by the appearance of a blue colouration.

Question 4.
i) Draw the structure of propanone. Write the hybridisation of each carbon in propanone.
ii) Arrange the following carbocations in the increasing order of their stability. Justify.
CH3+, CH3CH2+, (CH3)2CH+
iii) What is the method used to separate a mixture of o-Nitrophenol from p-Nitrophenol? Which property is utilized for separation?
Answer:

Question 5.
1. Give the IUPAC name of the following compound.

2. How can you detect the presence of nitrogen in an organic compound?
3. Arrange the following in the increasing order of stability.
(CH3)2CH+, CH3-CH2+, (CH3)3C+
Answer:
1. 2-chloro, 2-methyl propane

2. Presence of nitrogen can be detected by Lassigne’s test. The sodium fusion extract is boiled with FeSO4 and then acidified with con.H2SO4. The formation of Prussian blue colour conforms the presence of nitrogen.
3.

Question 6.
Predict the product in the following reactions and identify the rules:

Answer:
a) When propene is allowed to react with HBr in the presence of peroxide, 2-Bromo propane is obtained as the minor product. (Peroxide effect, Kharasch effect or Anti MarkownikofFs rule of addition).

Question 8.
Write the IUPAC names of the following:

Question 10.
What is the relationship between the members of following pairs of structures? Are they structural or geometrical isomers or resonance contributors?

Answer:
a) Structural isomers (actually position isomers as well as metamers)
b) geometrical isomers,
c) resonance contributors because they differ in the position of electrons but not atoms:

Question 11.
Expain the reason for the fusion of an organic compound with metallic sodium for testing nitrogen, sulphur and phosphorus.
Answer:
The organic compound is fused with sodium metal to convert these elements (which are present in the covalent form) to ionic form. For example, Sulphur is changed to Na2S, nitrogen to NaCN and phosphorus to Na3PO4 The presence of sulphide ions, cyanide ions and phosphate ions can thus be confirmed by using suitable reagents.

Plus One Chemistry Organic Chemistry: Some Basic Principles and Techniques Four Mark Questions and Answers 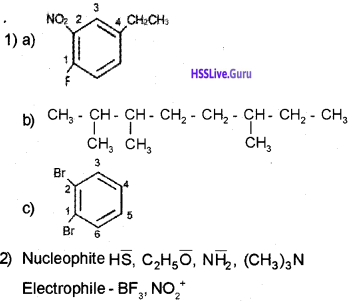 2. Lassigne’s test is used to determine the presence of nitrogen, halogens and sulphur present in the organic compound.

Question 4.
1. What is metamerism? Give example for metamers.
2. What are free radicals? How are they formed?
Answer:
1. It is the isomerism which arises due to different alkyl chains on either side of the functional group in the molecule.
e.g. Methoxypropane(CH3OC3H7) and ethoxyethane (C2H5OC2H5) are metamers.

Question 5.
1. How will you prepare butane?
2. Explain Markownikoff’s rule for the addition reaction using a suitable example.
Answer:
1. When an alkyl halide (ethyl chloride) is allowed to react with metalic sodium in presence of dry ether,

2. Markownikoff’s rule of addition:
When a hydrogen hallide is added to an unsymmetrical alkane the halogen atom will goes to the double bond carbon containing lesser number of hydrogen atom, eg:

Question 6.
Identify the isomerism exhibited by the following compounds.

Question 7.
i) Predict the products of

ii) Classify the following compounds into aromatic and non-aromatic.

(iii) Which of the following compounds will show geometrical isomerism?
a) CH3 CH=CHCH3
b) (CH3)23 C=CH2
Answer: 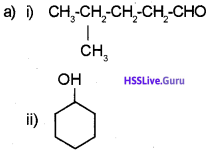 b) Write the structure of the following.
i) 2-Chloro-2-methyl butanol
ii) 4-Nitro-1-pentene
Answer:
a) i) 4-Methyl pentanal
ii) Cyclohexanol 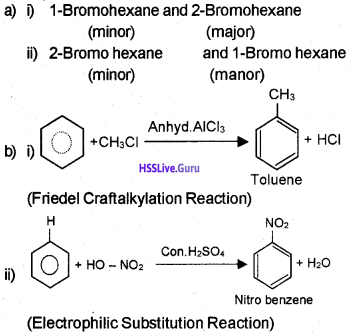 Question 10
a) Explain the term
(i) Inductive effect
(ii) Nucleophile
b) Write the structural formula of the following.
i) 2,5,6-Trimethyloctane
ii) 2,4-Dimethylpentane
c) Suggest the suitable technique for separation of organic compounds given in the data.
i) Aniline-water mixture
ii) Glycerol from spent-lye
Answer:
a) Inductive effect:
If more electronegative atom X linked to a carbon atom then the bonded electron pair will be shifted more towards X. So X acquires a small negative charge and carbon get a small charge. So this carbon atom attracts the a bonded electron pair towards its from nearest carbon atom. Therefore the change is transferred from one carbon to other.

Position isomerism:
This isomerism arises as a result of the difference in the position of double bond triple bond and functional group.
The following chain isomers are possible for the molecular formula C4H8.
CH2 = CH – CH2 – CH3 1-butene
CH3 – CH = CH – CH3 2-butene

Metamerism:
This isomerism arises as a result of the difference in the alkyl group present on either side of the functional group.
Consider the molecular formula C4H10O. The following two metamers are possible for this molecular formula.
CH3 – O – CH2 -CH2 -CH3 Methyl propyl ether
CH3 – CH2 – O – CH2 – CH3 Diethyl ether

Question 12.
Why is nitric acid added to sodium extract before adding silver nitrate for testing halogens?
Answer:
Sodium extract is boiled with nitric acid to decompose NaCN and Na2S, if present,

If the sodium extract is not boiled with nitric acid then NaCN and Na2S formed will react with AgN03 and hence will interfere with the test as shown below: