Students can Download Chapter 6 Thermodynamics Notes, Plus One Chemistry Notes helps you to revise the complete Kerala State Syllabus and score more marks in your examinations.

Introduction
The study of energy transformations forms the subject matter or thermodynamics.

Types Of The System
1. Open System:
In an open system, there is exchange of energy and matter between system and surroundings

2. Closed System:
In a closed system, there is no exchange of matter, but exchange of energy is possible between system and the surroundings

3. Isolated System:
In an isolated system, there is no exchange of energy or matter between the system and the surroundings. The presence of reactants in a thermos flask or any other closed insulated vessel is an example of an isolated system.

The Internal Energy as a State Function
1. Work:
The system which can’t exchange heat between the system and surroundings through its boundary is called adiabatic system. The manner in which the state of such a system may be changed will be called adiabatic process. Adiabatic process is a process in which there is no transfer of heat between the system and surroundings.
Internal energy, U, of the system is a state function. The positive sign expresses that wad is positive when work is done on the system. Similarly, if the work is done by the system, wad will be negative.

2. Heat:
A system change its internal energy by ex-change of heat. The q is positive, when heat is transferred from the surroundings to the system and q is negative when heat is transferred from system to the surroundings. first law of thermodynamics, which states that The energy of an isolated system is constant.
i. e., ∆U = q + w
It is commonly stated as the law of conservation of energy i.e., energy can neither be created nor be destroyed.

Applications
Work
The work done due to expansion or compression of a gas against an opposing external pressure is called the pressure – volume type of work. It is a kind of mechanical work.

If Y is the initial volume and Vf is the final volume of a certain amount of gas and Pex is the external pressure, then the work involved in the process is given by
w = – Pex (Vf – Vi) or w = -Pex ∆V

Enthalpy, H
1. A useful new state function:
We know that the heat absorbed at constant volume is equal to change in the internal dnergy i.e., ∆U= qp

We may write equation as ∆U=qp – p∆V at constant pressure, where qp is heat absorbed by the system and -pAV represent expansion work done by the system.

On rearranging, we get qp = (U2 +pV2) = (U1 +pV1) Now we can define another thermodynamic function, the enthalpy H [Greek word enthalpien, to warm or heat content] as :
H=U+PV

Although q is a path dependent function, H is a state function because it depends on U, p and V, all of which are state functions.

For finite changes at constant pressure, we can write ∆H = ∆U + ∆pV

3. Heat Capacity:
The heat required to rise the temperature of the system in case of heat absorbed by the system.

The magnitude of the coefficient depends on the size, composition, and nature of the system. We can also write it as q = C ∆T

Specific heat, also called specific heat capacity is the quantity of heat required to raise the temperature of one unit mass of a substance by one degree Celsius (or one kelvin). q = c × m × ∆T

Measurement Of ∆U And ∆H: Calorimetry
We can measure energy changes associated with chemical or physical processes by an experimental technique called calorimetry.

1. ∆U measurements:
Here, a steel vessel (the bomb) is immersed in a water bath. The whole device is called calorimeter. The steel vessel is immersed in water bath to ensure that no heat is lost to the surroundings. A combustible substance is burnt in pure dioxygen supplied in the steel bomb. Heat evolved during the reaction is transferred to the water around the bomb and its temperature is monitored. Since the bomb calorimeter is sealed, its volume does not change i.e., the energy changes associated with reactions are measured at constant volume. Under these conditions, no work is done as the reaction is carried out at constant volume in the bomb calorimeter. Even for reactions involving gases, there is no work done as ∆V = 0. 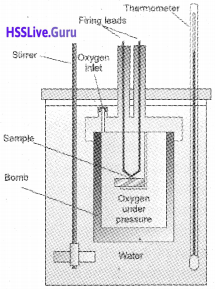 2. ∆H measurements:
Measurement of heat change at constant pressure (generally under atmospheric pressure) can be done in a calorimeter at constant p

In an exothermic reaction, heat is evolved, and system loses heat to the surroundings.

3. Standard enthalpy of formation
The standard enthalpy change for the formation of one mole of a compound from its elements in their most stable states of aggregation (also known as reference states) is called Standard Molar Enthalpy of Formation( ∆fH°).

Hess’s Law of Constant Heat Summation Hess’s Law:
If a reaction takes place in several steps then its standard reaction enthalpy is the sum of the standard enthalpies of the intermediate reactions into which the overall reaction may be divided at the same temperature.

Enthalpy Calculator is a free online tool that displays the Enthalpy for the given equation.

Combustion reactions are always accompanied by the evolution of heat. Hence enthalpy of combustion is always negative.

2. Enthalpy of atomization (symbol: ∆aH°)
It is the enthalpy change on breaking one mole of bonds completely to obtain atoms in the gas phase.

3. Bond Enthalpy (symbol: ∆bondH°)
The bond dissociation enthalpy is the change in enthalpy when one mole of covalent bonds of a gaseous covalent compound is broken to form products in the gas phase.

Spontaneity
A process which has an urge or a natural tendency to occur under a given set of conditions is known as a spontaneous process.
Some of the spontaneous process need no initiation, i.e., they take place by themselves. Dissolution of common salt in water, evaporation of water in an open vessel, combination of NO and oxygen to form NO2, neutralisation reaction between NaOH and HCl, etc. are examples of such processes. But some other spontaneous processes need initiation. For example, hydrogen reacts with oxygen to form water only when initiated by passing an electric spark. Once initiated, it occurs by itself.

2. Entropy and spontaneity
Entropy(S) is the measure of the degree of randomness or disorder in the system. The greater the disorder in an isolated system, the higher is the entropy. The crystalline solid state is the state of lowest entropy (most ordered), The gaseous state is state of highest entropy. ∆S is independent of path.

Dilution factor formula. After the first tube, each tube is the dilution of the previous dilution tube.

When a system is in equilibrium, the entropy is maximum, and the change in entropy, ∆S = 0.

Enthalpy of Dilution
It is known that enthalpy of solution is the enthalpy change associated with the addition of a specified amount of solute to the specified amount of solvent at a constant temperature and pressure. This argument can be applied to any solvent with slight modification. Enthalpy change for dissolving one mole of gaseous hydrogen chloride in 10 mol of water can be represented by the following equation.
HCl(g) + 10 aq. → HCl. 10 aq. ∆H = -69.01 kJ/mol

The values of ∆H show general dependence of the enthalpy of solution on amount of solvent. As more and more solvent is used, the enthalpy of solution approaches a limiting value, i.e, the value in infinitely dilute solution. For hydrochloric acid this value of AH is given above in equation (S-3).
If we subtract the first equation (equation S-1) from the second equation (equation S-2) in the above set of equations, we obtain

Theoretical Yield Calculator is a free online tool that displays the amount of product predicted with the complete utilisation of the limiting reactant.

Absolute Entropy and Third Law of Thermodynamics
Molecules of a substance may move in a straight line in any direction, they may spin like a top and the bonds in the molecules may stretch and compress. These motions of the molecule are called translational, rotational and vibrational motion respectively. When temperature of the system rises, these motions become more vigorous and entropy increases. On the other hand, when temperature is lowered, the entropy decreases. The entropy of any pure crystalline substance approaches zero as the temperature approaches absolute zero. This is called third law of thermodynamics. This is so because there is perfect order in a crystal at absolute zero.

The statement is confined to pure crystalline solids because theoretical arguments and practical evidences have shown that entropy of solutions and super cooled liquids is not zero at 0 K. The importance of the third law lies in the fact that it permits the calculation of absolute values of entropy of pure substance from thermal data alone. For a pure substance, this can be done by summing \(\frac{q_{\text {rev }}}{T}\) increments from 0 K to 298 K. Standard entropies can be used to calculate standard entropy changes by a Hess’s law type of calculation.